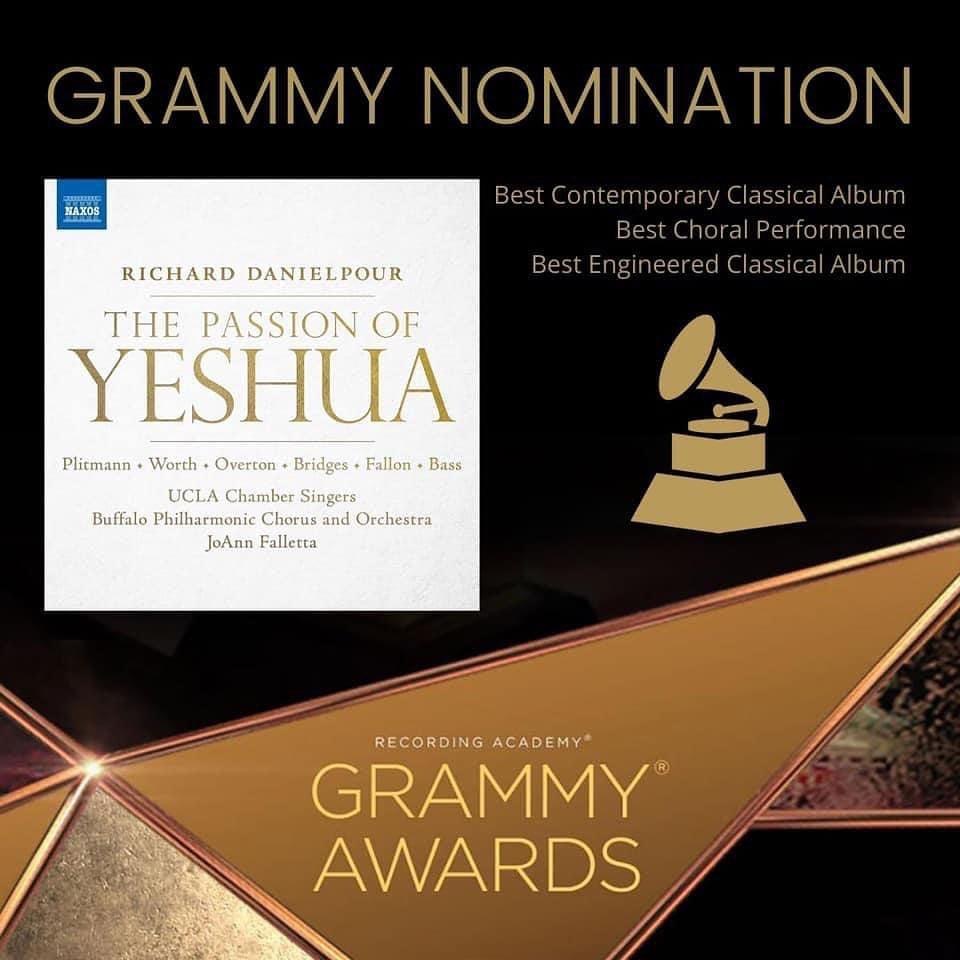 BUFFALO, NY—The Buffalo Philharmonic Orchestra is the proud recipient of three nominations for the 63rd GRAMMY Awards for its recording of Richard Danielpour’s ‘The Passion of Yeshua.” The recording features the Buffalo Philharmonic Orchestra conducted by JoAnn Falletta, the Buffalo Philharmonic Chorus, prepared by Adam Luebke, and the UCLA Chamber Singers prepared by James K. Bass. The BPO and its collaborators received nods in the categories of “Best Contemporary Classical Composition” and “Best Choral Performance.” Bernd Gottinger, the BPO’s longtime audio engineer, is nominated in the category of “Best Engineered Album, Classical.” Gottinger is the audio and video producer behind the BPO’s current virtual performance series, BPOnDemand.

‘The Passion of Yeshua’ is a dramatic oratorio written by contemporary composer Richard Danielpour, a schoolmate and longtime friend of Falletta’s. It is the personal telling of the final hours of Christ on Earth. The piece incorporates Christ’s Jewish faith in passages in Hebrew, as well as the seldom-heard voices of Mary Magdalene and Mary the Mother of God for the first time in a work of this form. The recording features Hila Plitmann, soprano; J’Nai Bridges, mezzo-soprano; Timothy Fallon, tenor; and baritones Matthew Worth, Kenneth Overton, and James K. Bass.

“The musicians, singers, Richard and I are beyond thrilled to have received not one but three nominations for this remarkable recording,” commented Falletta. “’The Passion of Yeshua’ was an incredible project that brought together hundreds of musicians and voices in a performance that was truly unique and full of emotion. We are humbled and honored to have been named alongside so many other outstanding nominees.”

In 2008, under the direction of Falletta, the BPO won a GRAMMY Award for “Best Contemporary Composition” for its recording of John Corigliano’s ‘Mr. Tambourine Man: Seven Poems of Bob Dylan.’ Falletta most recently took home a GRAMMY in 2019 for “Best Classical Compendium” for the recording of ‘Fuchs: Piano Concerto ‘Spiritualist’; Poems Of Life; Glacier; Rush,’ which she recorded with the London Symphony.

The GRAMMY Awards will be broadcast on CBS on Sunday, January 31, 2021 at 8 p.m. Eastern. Additionally, the GRAMMY Premiere Ceremony, where the majority of the 84 categories of awards are handed out, including those for which the BPO is nominated, will be streamed live on GRAMMY.com.

The BPO’s recording of Richard Danielpour’s ‘The Passion of Yeshua’ is available for purchase at bpo.org or by calling the Box Office at (716) 885-5000.

ABOUT BUFFALO PHILHARMONIC ORCHESTRA
The Buffalo Philharmonic Orchestra Society, Inc. provides a resident, professional, major symphony orchestra of artistic excellence and integrity to enrich the quality of life in Western New York through the presentation of live symphonic music and other musical events that educate and entertain the broadest possible audiences within and beyond the Western New York region. Since its founding in 1935, the BPO has served as Buffalo’s cultural ambassador. JoAnn Falletta is the Music Director of the Grammy® Award-winning orchestra, which presents more than 120 Classics, Pops, Rock, Kids and Youth concerts each year for over 200,000 people. For more information, visit bpo.org.