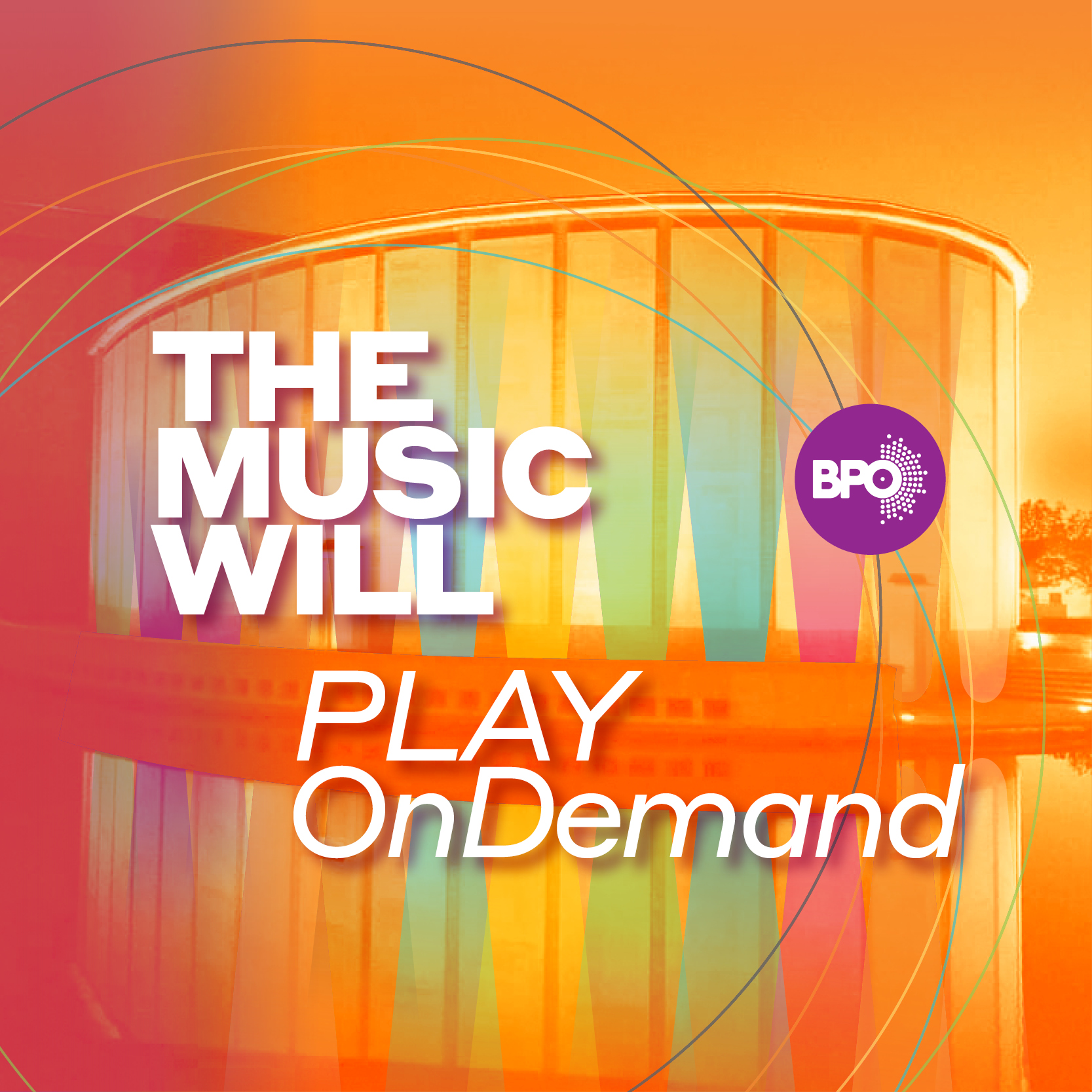 BUFFALO, NY — As Buffalonians join the rest of the world in adjusting to the new normal brought by the pandemic, so too must the Buffalo Philharmonic Orchestra. Devoted to the mission of presenting symphonic music for the entire Western New York community, no matter the circumstances, today the BPO announces new plans for video-streamed concerts in lieu of live concerts, since audiences are not yet allowed in Kleinhans Music Hall per New York Forward guidelines.

The new video-streamed performance series, BPOnDemand, will use state-of-the-art audio and video recording technology bringing the magical acoustics of Kleinhans into the living room of patrons via their home computer or mobile device. The series will be broadcast on Saturdays at 8 p.m. and available on-demand for a limited time thereafter. BPOnDemand performances will be made available to all current subscribers for free, as well as those patrons near and far who wish to purchase a virtual ticket on a concert-by-concert basis.

Revisions to the 2020-21 season repertoire announced this past January have been necessary in order to accommodate an orchestra of socially-distanced size. Previously announced guest artists will be re-engaged later in the 2020-21 season or in future seasons. M&T Bank Classics series headliner Renee Fleming has expressed sincere disappointment that she will not be able to perform for Buffalo audiences this season but has graciously committed to a performance on the 2021-22 season.

The BPOnDemand video-streamed performance series serves not only as an outlet for lovers of symphonic music to once again enjoy the concert experience in a new and inventive way, but also helps to ensure that the 73 full-time musicians of the BPO remain employed.

“Working with our audio and video experts, we are certain that we will be able to present the next best option to live performances—streamed video performances that make use of the magical acoustics of Kleinhans and also provide a rarely seen up-close-and-personal perspective on the concert experience with our incredible musicians,” commented JoAnn Falletta, music director, “but the musicians and I still hold hope that we will be able to perform for live audiences soon.”

The revised schedule for the BPO’s 2020-21 M&T Bank Classics fall and holiday concert programming with Music Director JoAnn Falletta is as follows:

A Celebration of the Seasons
Streaming Sat. Sep. 26, 8 p.m.
A theme of joyful rebirth takes center stage as JoAnn Falletta conducts the opening of the BPO season. Copland’s Appalachian Spring, an enduring portrait of the American landscape, and Vivaldi’s The Four Seasons, an exquisite musical narrative of nature’s seasons played by concertmaster Nikki Chooi and set to a visual display of Vivaldi’s poetry, are paired with a contemporary work, Starburst by Jessie Montgomery, a past finalist of the national Sphinx Competition for young Black and Latinx classical string players.

A String Serenade
Streaming Sat. Nov. 7, 8 p.m.
As the first African American to be awarded the Pulitzer Prize for Music (1996), it is fitting that George Walker’s Lyric for Strings is included on a program of works brimming with inspiration. Mozart’s Wind Serenade No. 11 K. 375 is pleasingly playful yet heartfelt, Handel’s Harp Concerto No. 6, played by principal harpist Madeline Olson, lends the harp a delicate magic, and Bach’s Air is celestial with the instantly-recognizable second movement of his Baroque masterpiece. JoAnn Falletta conducts.

Bach, Beethoven & Beyond
Streaming Sat. Nov. 21, 8 p.m.
Two early 20th century composers have grand masters to thank in this classic program conducted by JoAnn Falletta. Beethoven’s Septet led to increased early fame for the young composer. The extraordinary and familiar Brandenburg Concerto No. 3 by J.S. Bach was an inspiration for Stravinsky’s Dumbarton Oaks, and Respighi’s Ancient Airs and Dances Suite No. 3 was influenced by Baroque-era Italian works.

JoAnn’s Classical Christmas
Streaming Sat. Dec. 12, 8 p.m.
BPO musicians highlight our annual offering when Sal Andolina presents a special saxophone rendition of holiday favorites, and the BPO Brass shine in Darin Kelly’s Of Nights and Lights, a sparkling Hanukkah composition. Perennial classics including selections from Menotti’s Amahl and the Night Visitors, Respighi’s “The Adoration of the Magi,” Vaughan-Williams Fantasia on Greensleeves, and more bring the spirit of the season to life.

The revised schedule for the 2020-21 BPO Pops fall and holiday concert programming with Principal Pops Conductor John Morris Russell is as follows:

That Studio Sound: Jazz Classics for Lovers
Streaming Sat. Oct. 17, 8 p.m.
From the famed recording studios at Capitol Records in Los Angeles, arranger Nelson Riddle and the biggest singing sensations of the era created a body of work that defines the cool sophistication of popular jazz in the 1950s and 60s. The BPO brings arrangements of classics by Gershwin, Porter and Jobim, recorded by the likes of Frank, Nat, and Ella, back to life in all their original splendor with Buffalo crooners Katy Miner and Chris Vasquez. A romantic evening of sultry swing

Simply Bewitching
Streaming Sat. Oct. 31, 8 p.m.
From Hollywood horror, chilling orchestral classics and creepy musical tales, you’ll be spellbound by the magic of your BPO. Music from Psycho, The Legend of Sleepy Hollow and autumnal favorites weave together an enchanted night of thrills and chills.

A Brass Act
Streaming Sat. Nov. 14, 8 p.m.
Thrill to the power and majesty of the BPO Brass as they perform popular classics, from splendid fanfares and marches, to ragtime and jazz. A jamboree of musical styles from the world over that will be glorious, tuneful, irreverent, and fun. You won’t want to miss a beat!

John Morris Russell’s Holiday Pops
Streaming Sat. Dec. 19, 8 p.m.
Celebrate the holidays with “Mr. Christmas” himself, Maestro John Morris Russell, with festive Pops favorites from your BPO! It’s Western New York’s most celebrated holiday tradition with an eclectic variety of seasonal music from popular song, film, musical theatre, gospel and jazz. As heartwarming as it is fun, it’s a concert for everyone, featuring guest appearances by soulful Buffalo singers Zoe Scruggs and George Brown and maybe even the “man with the bag” himself… if you’re nice!

All artists and repertoire are subject to change. Further details about all programs on the 2020-2021 concert season can be found at bpo.org.

Performances scheduled January through June of 2021 remain as scheduled for the time being, though Music Director JoAnn Falletta, Principal Pops Conductor John Morris Russell, and the BPO leadership team are closely monitoring the ever-evolving pandemic situation and are actively working on alternative programs that will meet social distancing guidelines.

Current subscribers to the 2020-21 season who have tickets for concerts that fall within the September through December timeframe will automatically have their tickets converted to a FLEX pass, to be redeemed at the subscriber’s leisure for a concert later in the season when the BPO hopes to once again be able to host live audiences. All subscribers will be contacted by the Box Office staff over the coming weeks to discuss their preferred BPO experience this season. Subscribers are encouraged to await contact from the BPO, but those with urgent questions may call the Box Office at (716) 885-5000.

Subscriptions for the 2020-21 concert season are still on sale now including the incredibly flexible FLEX Pack option, which allows patrons to secure the benefits of a subscription now and choose concert preferences later. Your subscription will give you access to the BPOnDemand video-streamed performance series, plus tickets for live concerts when they resume and other subscriber benefits, including easy ticket exchanges.

Single tickets for the BPOnDemand series will be available for purchase beginning September 1, 2020. Tickets for live performances later in the season will be made available at a later date. Patrons are encouraged to sign up at bpo.org to receive the latest updates via the BPO e-mail list, and to call the Box Office at (716) 885-5000 with any questions. Please note that the Box Office is working remotely during this time, Monday through Friday, 10 a.m. to 5 p.m. and Saturday, 9 a.m. to 1 p.m.

Major corporate support for the BPO is provided by M&T Bank, BlueCross BlueShield of Western New York, Calspan, Elderwood and Keybank. Government support is provided by Erie County, the New York State Council on the Arts, and the National Endowment for the Arts.

ABOUT BUFFALO PHILHARMONIC ORCHESTRA
The Buffalo Philharmonic Orchestra Society, Inc. provides a resident, professional, major symphony orchestra of artistic excellence and integrity to enrich the quality of life in Western New York through the presentation of live symphonic music and other musical events that educate and entertain the broadest possible audiences within and beyond the Western New York region. Since its founding in 1935, the BPO has served as Buffalo’s cultural ambassador. JoAnn Falletta is the Music Director of the Grammy® Award-winning orchestra, which presents more than 120 Classics, Pops, Rock, Kids and Youth concerts each year for over 200,000 people. For more information, visit bpo.org.