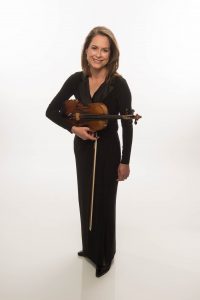 Amy Glidden is currently the associate concertmaster of the Buffalo Philharmonic. Praised by the Buffalo News for her “keen rhythmic acuity, consistently fine tone and an innate sense of phrasing,” Amy has performed on stages throughout Western New York. A native of Wichita, Kansas, Amy attended the University of Kansas where she received a B.A. in Biology as well as a B.M. in Violin Performance. Subsequently, she received a Master of Violin Performance degree from the Cleveland Institute of Music. Orchestras with which Amy has performed include the Toronto Symphony, the Canadian Ballet Orchestra, the Fort Worth Symphony, and the Grand Teton Music Festival orchestra. She was previously the concertmaster of the Mendocino Music Festival and the assistant concertmaster of the Marin Symphony. In the summer of 2018, Amy was appointed concertmaster of the Saratoga Opera orchestra. She travels west each summer to participate in the Sun Valley Summer Symphony.

Amy has often performed as a soloist with the Buffalo Philharmonic Orchestra, including performances of Prokofiev’s Violin Concerto No. 2 under the baton of JoAnn Falletta. Other solo engagements include performances with the Ars Nova Chamber Orchestra, the Amherst Symphony, the Cheektowaga Symphony and the Buffalo State Philharmonia. In 2009, Amy was invited to join the newly created string program at Buffalo State College. She performed at the 2012 dedication of Buffalo State’s new Ciminelli Recital Hall and founded the Buffalo State String Collective, which brings students, faculty, and community members together in string music performance. Formerly a teacher at Orchard Park Suzuki Strings, Amy maintains a home studio and has given masterclasses throughout western New York as well as nationally. As a chamber musician, she performs locally with the Roycroft Chamber Music Festival and the Buffalo Chamber Players, and is a founding member of the Artemis and Clara String Quartets.