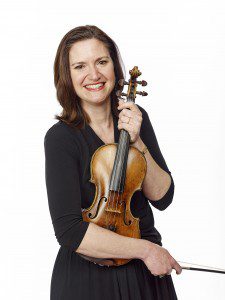 Andrea Cone, a member of the violin section of the Buffalo Philharmonic,  frequently performs chamber music with her friends and colleagues from the BPO in series, including Roycroft Festival, Buffalo Chamber Players and at Canisius College in their Informally Formal Chamber Music series. Andrea was an adjunct faculty member at University of Buffalo for many years where she was the second violinist with the Westwood String Quartet. She has been a soloist with the BPO, performing works of Sarasate, Mozart, Svendson and Saint-Saens. A member and frequent soloist with Ars Nova, Andrea had many opportunities to to perform with the group in their well known Viva Vivaldi Festival.

Andrea is a graduate of the Eastman School of Music where she studied with Sylvia Rosenberg.  While she was still a student there, she was offered a part-time contract with the Rochester Philharmonic, then under the direction of David Zinman. Shortly after graduating,  Andrea joined the BPO,  where she met her husband, Doug Cone, also a violinist in the BPO. They live in Williamsville with their two children, Drew and Matt.