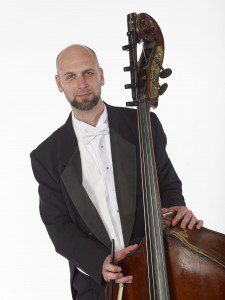 Edmond Gnekow grew up in Sacramento, California. His undergraduate degree is from UC Berkeley, and he has an MM from Indiana University at Bloomington. His principal teachers have been Thomas Derthick, Stephen Tramontozzi, and Lawrence Hurst. While at Indiana, he occasionally subbed in the Pittsburgh and Kansas City Symphony Orchestras, as well as the American Bach Soloists. He won his position in the BPO bass section in 2000.

He loves living in Buffalo, not the least because it’s where he met his wife, playwright Donna Hoke, and her four children. Favorite moments at Kleinhans Music Hall are far too many to list, but the one constant during any given performance is gratitude.