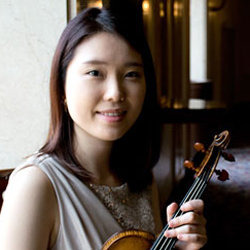 Korean-Dutch violinist Hee Sagong joined the first violin section of the Buffalo Philharmonic Orchestra in 2016 while still pursuing her Doctor of Musical Arts degree at the Eastman School of Music. As an orchestral violinist, she has performed with numerous orchestras and ensembles in Western/Central New York, including Rochester Philharmonic Orchestra, Symphoria, Finger Lakes Opera, Ars Nova Musicians Chamber Orchestra, Camerata di Sant’ Antonio Chamber Orchestra, Slee Sinfonietta, and more. She is a frequent soloist with the Ars Nova Chamber Orchestra and Camerata di’ Sant Antonio. During her term as a lecturer with the SUNY Buffalo State College, Sagong played concertmaster with the Buffalo State College Philharmonia in 2018-2019.

Sagong began taking violin lessons at the age of seven, and at fifteen she was accepted into the Preparatory Program at the Conservatorium van Amsterdam, where she studied with Alexander Kerr, former concertmaster of the Royal Concertgebouw Orchestra and current concertmaster of the Dallas Symphony Orchestra. She continued her studies with Kerr at Indiana University, where she received a Bachelor of Music with Distinction. Sagong earned a Master of Music and Doctor of Musical Arts from the Eastman School of Music. She studied with Oleh Krysa for both degrees and served as his teaching assistant for three years. At the end of her master’s degree, Sagong was awarded the Performer Certificate, a recognition for outstanding violin playing. In addition to her master’s degree, she completed the Orchestral Studies Fellowship Program. During her doctorate coursework, Sagong received the Buxton Fellowship and was selected to perform for the Conservatory Project at the Kennedy Center for the Arts in Washington D.C.

Sagong is a prize-winner of the Interprovinciaal Concours, Prinses Christina Concours, and AMIS International Solo and Ensemble Festival. She has performed solo recitals in the Netherlands, Germany, England, and the United States, and was invited to selective festivals, including Lake George Music Festival (Lake George, NY), National Repertory Orchestra (Breckenridge, CO), Karl Flesch Akademie (Germany) and Orlando Chamber Music Festival (The Netherlands). At age thirteen, she was the youngest participant of the Koji Toyoda Meisterkurs in Kloster Michaelstein, Germany. In 2013, she toured as concertmaster with the NJO Symphony and Chamber Orchestras, playing in numerous venues in the Netherlands, including the Royal Concertgebouw Concert Hall.