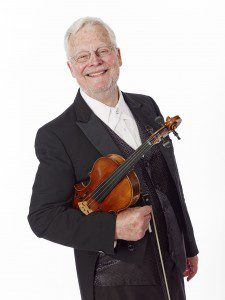 A native of Akron, Ohio, Jeffrey Jones joined the BPO in September '75, following seasons with the Utah Symphony, the Indianapolis Symphony, two seasons as assistant principal Second Violin with the National Arts Centre Orchestra of Canada (Ottawa), the Baltimore Symphony, and three summers as Assistant Principal with the Aspen Festival Orchestra.

Serious violin study with Donald Weilerstein and Dorothy DeLay followed a stint in the US Army Band Strings, during which time he performed at the White House on several occasions for Presidents Kennedy and Johnson.

Jeff gained his first orchestral experience as Principal Second with the Akron Symphony under Louis Lane; as a founding member of the Blossom Festival School of the Cleveland Orchestra, he served as Principal Second violin of the Blossom String and Chamber Orchestras under Rafael Druian, Louis Lane, and Pierre Boulez, as well as participating in several chamber groups during those summers of '68- '69.

While in Ottawa, Mr. Jones was invited to perform Mendelssohn's Octet with the legendary Juilliard Quartet – an experience he describes as a "once in a lifetime experience".

Sine 1977, Jeff has been affiliated with the Greater Buffalo Youth Orchestra as coach, adjudicator, and member of the Board of Directors.He and his wife, Janice, an oboist, have 2 daughters pursuing careers in teaching.