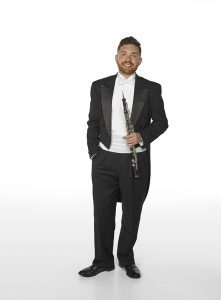 Joshua Lauretig, hailed for his "considerable musicianship" and "beautiful rich sound" by coolcleveland.com, is the second oboist of the Buffalo Philharmonic Orchestra. He also serves as the second oboist of the Colorado Music Festival Orchestra and has previously served as second oboe and solo English Horn of Symphony in C (formerly the Haddonfield Symphony). He has performed with the Philadelphia Orchestra, Sarasota Orchestra and the Baltimore and Chautauqua Symphony Orchestras.

Joshua was awarded first prize in the International Double Reed Society's 2014 Young Artist Competition and received Honorable Mention in the 2019 Gillet-Fox Oboe Competition. He has been invited to perform at the music festivals of Sarasota, Colorado, and Aspen, as well as the Moritzburg Festival Academy. He has been featured on recitals sponsored by the Interlochen Center for the Arts and the Ventfort Hall Summer Chamber Music Concert Series, and has performed on WHYY-TV Philadelphia's "On Stage at Curtis." He has given solo performances with the Ars Nova Chamber Orchestra, the Lakeland Civic Orchestra, the Mid-Atlantic Symphony, the Young Artist Debut Orchestra of Erie, PA, and the United States Navy Band.

A student of Richard Woodhams (former principal oboe, Philadelphia Orchestra), Joshua earned a Bachelor's Degree at the Curtis Institute of Music, where he was awarded the John S. and James L. Knight Foundation Fellowship. Other teachers include Danna Sundet, Olav van Hezewijk and Keisuke Wakao.