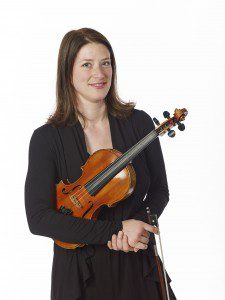 Since September 2010, Loren Silvertrust has been a member of the Buffalo Philharmonic Orchestra violin section. She studied violin at the Music Institute of Chicago, and at the Indiana Jacobs School of Music, where she was awarded the Dean's merit scholarship and earned a place in the 2006 Kuttner Quartet in residence. She also holds a degree in comparative literature from Williams College.

Before coming to Buffalo, Loren held a three-year fellowship with the New World Symphony and also played as a member of the Evansville Philharmonic, the Orlando Symphony, and the Florida Grand Opera. She has taken part in many music festivals across the country including Spoleto, Aspen, Music Academy of the West, Colorado Music Festival, Orchestra of the Americas, and the Breckenridge Music Festival.

Loren has been a featured soloist and chamber musician on local concert series presented by Friends of Vienna, Buffalo State College, Canisius College Informally-Formal, and the Two Sisters Foundation. She has performed solos with Ars Nova, the Berkshire Symphony, and the Buffalo Philharmonic, and enjoys frequent appearances with the Buffalo Chamber Players.