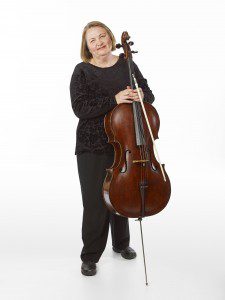 Nancy Anderson's aunt played the cello, and so she fell in love with the sound of the instrument at an early age. She pleaded for lessons but was told to wait until she was 10. Her first cello was $27. She recalls, "No one had to tell me to practice, instead they told me not to work too hard. My grandmother told my mother not to encourage my enthusiasm for the cello since it was not a viable career."

When she was 13, her family moved to Winston-Salem, NC and she began studying with her mentor, Charles Medlin. "When I practiced well for a lesson I was rewarded with a longer lesson. I lived for my cello lessons. Nothing else seemed to matter. I guess you could say I ate drank and slept anything to do with cello," she said.

In the summers after her sophomore and junior years of high school, she attended the Eastern Music Festival. She credits this experience with solidifying her desire to become a professional cellist.

She auditioned for Indiana University. "I had a dream of studying with Janos Starker. Even though I was immediately accepted after my audition, I was so intimidated by the huge campus and particularly the music building that I declined the acceptance. I stayed in Winston-Salem and graduated from North Carolina School of the Arts. Mr. Starker did come to the School of the Arts for regular master classes of which I participated in, so my dream was somewhat fulfilled. In one such masterclass I performed the Shostakovich Cello Sonata. After my performance, Mr. Starker admitted he never had a desire to learn the piece until I played it for him."

In the summer after graduation, she auditioned for the Charlotte Symphony and was hired. After one season, despite winning the assistant principal audition for the next season, she left to accept a graduate assistantship with Mary Lou Rylands at the University of Connecticut in Storrs. There, she received many performance and teaching opportunities. While in graduate school, with the help of her parents, she purchased her dream cello, crafted by Leopold Widhalm in 1801, which she still plays today. After completing her masters degree in cello performance in the spring of 1980, she began auditioning. She recalls, "That July I loaded up my camping gear and cello and set out for a campground outside Buffalo. The next morning, I got up early put my practice mute on and warmed up in the tent sitting on my cooler. Then I packed up and showed up for my 9 AM audition."

After playing several rounds, Maestro Rudel and the audition committee welcomed her to the orchestra.

"Buffalo has been a wonderful place both musically and socially," she said. "There are many opportunities to perform with colleagues from big to small ensembles. One of many highlights of my career was teaching and performing as an adjunct faculty member at SUNY Fredonia from 1991-2004."

Whenever possible, she and her family enjoy escaping to their log cabin in the Adirondacks.