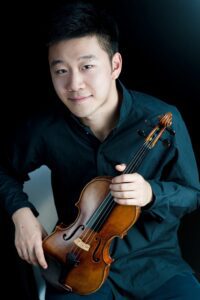 Violinist Xiaofan Liu is establishing himself as one of young generation’s most sought-after and exciting young musicians. Praised by the Berlin Philharmonic String Quartet as a “very tasteful young musician”, Xiaofan is the recipient of the Jules C. Reiner Violin prize from the Tanglewood Music Center and Boston Symphony Orchestra, and he had performed under the baton of world-renowned conductors, including Maestro Andris Nelsons, Christoph Von Dohnanyi, and Hugh Wolff.

As an avid chamber musician and soloist, he has appeared at numerous venues, such as Seiji Ozawa Hall and Koussevitzky Music Shed in Lenox, Carnegie Hall Stern auditorium in New York, National Concert Hall and Opera House in Taiwan, Disney Concert Hall in Los Angeles, Jordan Hall in Boston, and Kennedy Center in Washington DC where Xiaofan was invited by the White House in 2015 to perform with cellist, Yo-Yo Ma, in celebration of Maestro Seiji Ozawa’s lifetime achievements.

At the Tanglewood Music Center, Xiaofan received the Seiji Ozawa Fellowship in 2016 and was appointed as the concertmaster in The Leonard Bernstein Memorial Concert. In the following year, He was appointed by the Boston Symphony orchestra members and the Fromm Foundation as the leading violinist of the New Fromm players, an ensemble dedicated to New Music. Other music festivals Xiaofan has participated in include Bowdoin International Music Festival, Heifetz International Music Festival, and New York String Orchestra Seminar. He had also performed before great mentors, including Maxim Vengerov, Midori Goto, Martha Katz, Mihaela Martin, Nobuko Imai, and Pamela Frank.

Recently, he was invited by choreographer Mark Morris to join the Silk Road Ensemble and Mark Morris Dance Company in their national tour of the production, Layla and Majnun. Performances took places at Lincoln Stage in New York City, Harris Theater in Chicago, and Kennedy Center in Washington D.C.  Chicago Tribune praised the performance as “beautiful and illuminates the rich cultural traditions of a place largely unknown to the West”.

A native of China, Xiaofan is a prize winner at the China National Violin Competition. He began his violin studies at the Central Conservatory in Beijing before moving to California to attend Idyllwild Arts Academy when he was 14. He then received his Bachelor's degree at New England Conservatory, where he was the student of Masuko Ushioda and Malcolm Lowe. Xiaofan was often appointed to lead the New England Conservatory’s Philharmonia and Chamber orchestra throughout his time at school.

Xiaofan joined the Buffalo Philharmonic Orchestra while pursuing a master’s degree at Yale School of Music in 2019-2020 season, appointed by Maestra JoAnn Falletta.