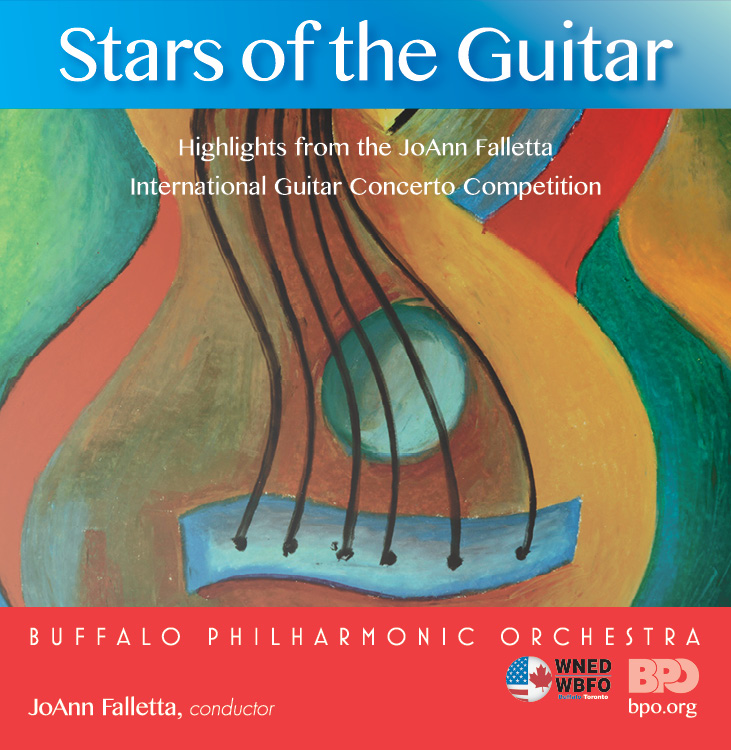 BUFFALO, NY – The Buffalo Philharmonic’s newest discs highlight two of the orchestra’s most important endeavors: its outreach to children, and its commitment to advancing young classical guitarists.

“Classics For Kids” continues the youth outreach that has been at the core of the BPO’s mission since its inception. Today, the BPO serves more than 40,000 students per academic year, with school-day programs aligned with the Common Core, an annual broadcast bringing a concert directly into classrooms, and the Sunday afternoon BlueCross BlueShield BPO Kids series which brings families together to experience music.

For this disc, the BPO teamed up with Buffalo native Robby Takac, bass player and co-founder of the Goo Goo Dolls. Takac narrates Paul Dukas’ “The Sorcerer’s Apprentice” and Camille Saint-Saens “Carnival of the Animals.” Observant listeners will also notice his cameo as The Beast in “Conversations of Beauty and the Beast,” part of Ravel’s “Mother Goose Suite.”

Orion Weiss and Anna Polonsky are the featured pianists in the familiar “Carnival of the Animals,” and Falletta herself contributes narration to the disc. Each piece on it is a staple of classical repertoire, and has been used for decades to introduce children to classical music.

The double disc “Stars of the Guitar” features seven of the most important concertos for guitar ever composed. The set was recorded live at the biennial JoAnn Falletta International Guitar Concerto Competition over the course of 10 years. The Competition brings six guitarists to Buffalo from all over the world to compete. Three are chosen to advance to the final round and perform concertos with the Buffalo Philharmonic Orchestra. WNED| WBFO is a co-sponsor of the competition, taking place next in June 8-11, 2016.

“The guitar was my first love, the enchanted vessel that transported a seven-year-old into a lifelong musical journey,” Falletta said in the disc’s liner notes. “The talent of the finalists is astonishing, the drama of the evening is palpable, and the passion and excitement of the audiences reflect the thrill of these great performances.”

Both discs were released on the orchestra’s house label, Beau Fleuve, and are available at the Kleinhans Music Hall box office or online at bpo.org. During the holiday season, select CDs from the orchestra’s catalogue are on sale for $5 when you purchase one of these new releases.